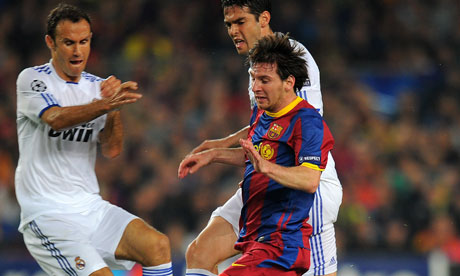 Real Madrid and Barcelona have no rivals in their domestic league. Photograph: Lluis Gene/AFP/Getty Images

The former Real Madrid general manager Jorge Valdano claimed last week that Spain's big two are reaching a crossroads. Soon, he said,Barcelona and Real Madrid will find themselves in a situation in which they have little choice but to seek out new challenges elsewhere, leavingLa Liga behind for a European league.

It is a subject that was in the background when the European Club Association met in Geneva on Tuesday but, as Valdano admitted, while Madrid and Barcelona would welcome such a move, rather more questionable is whether Europe's other big teams will have the same enthusiasm for leaving domestic competition behind.

"With every passing day there is a greater gap between the two greats and the rest of the league in Spain," Valdano said. "You look ahead and the sensation is that this situation will only get worse. There will come a time when this [situation] does not suit the big two either. In the future Madrid and Barcelona will have to look at teams that travel at the same speed as them and that will lead to a European league.

"There are two teams whose market is the whole world and the rest whose market is just their [regional] community. We are in a moment of transformation, which depends on what happens in Spain and in other leagues. The problem is that the Premier League works, Germany works: there is a lot of money there and a lot of passion for [domestic] football. They do not seem especially enthusiastic about leaving their leagues."

The fact that Valdano was asked about the future of La Liga illustrated the extent to which inequality is now definitively, if belatedly, on the agenda in Spain – reflected by an opening weekend which was met with dread as much as delight after Real Madrid defeated Real Zaragoza 6-0 and Barcelona beat Villarreal 5-0. The president of Sevilla, José María Del Nido, described the Spanish league as "rubbish – the greatest pile of junk in Europe".

In answering as he did, Valdano revealed an essential truth. He also revealed a sleight of hand, portraying Spain's big two as innocent victims of a league that simply cannot compete with them, rather than perpetrators of an inequality that threatens to destroy it. He also hinted at the threat that forever hovers in the background: the departure from La Liga of Madrid and Barcelona. It is a threat that, for now at least, suits no one but is used as a weapon on both sides of the divide.

There will come a time when the situation in La Liga does not suit the big two. But if so, Real Madrid have been complicit in that – either blind to the consequences of their actions or all too aware of them and thus deliberately destructive in their approach.

the next about 42 M Euros

will la Liga get ever less competitive??

should something be done like the PL's colective deal

Yesterday 12 Liga clubs, including Sevilla, Atlético, Athletic, Valencia and Villarreal, held a meeting to discuss the issue and form a united front to oppose the current status quo.

The meeting had been called by the Sevilla chairman, who invited all of the top flight's clubs except Barça & Madrid. The club's are proposing a less lop-sided scheme for revenue distribution - a fixed amount to be distributed between all of the clubs evenly, and a proportional share out based on league position, TV audiences and other aspects. Basically similar to the agreements in force in most if not all of Europe's big league bar La Liga.

The problem is that the horizon for any eventual deal is the 2014-15 season - no hope of change before then.