Manchester United, Ander Herrera and The Impostors, picking through the pieces 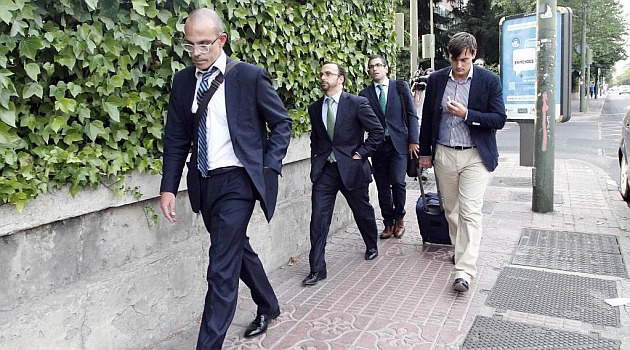 Spanish journalist Guillem Balague caused a storm on transfer deadline day when he appeared on Sky Sports News talking about the abandoned Manchester United move for Ander Herrera. Everything he said was what had earlier been reported in the Spanish media and mainly AS, the newspaper in Spain which Balague works for.

Balague spoke to Andy Burton and this is the transcript of the conversation which has caused so much fuss...

Guillem Balague: "Some of the details we'll find out in the next few hours, but some of it is quite bizarre. As we were reporting representatives of Manchester United went to the Spanish league about 7.30pm this evening, saying that they were willing to pay the buyout clause. Now, even though they were for an hour in the building and they left without paying the buyout clause and they quoted, erm, coming out of that building that there were bureaucratic problems.

Now it seems that they may not even be representatives of Manchester United, that they said they were, perhaps trying to get part of the deal, We have a bizarre situation which made the player believe, and Athletic Bilbao believe that the deal was about to happen and it seems that that's not the case. We'll know more details, but it's interesting how some people just try and get in the middle of deals without having, well not being representatives of one side or the other."

Andy Buton "You're saying these were impostors at the league offices in Spain?"

Guillem Balague: "It seems that that could have been the case, or that they tried to represent Manchester United without having the right permission."

Predictably, other news organisations picked up on the 'impostors' line and it's now being reported both here and in Spain. It's certainly entertaining to think that some chancers turned up at the Spanish league offices and tried to blag their way through a deal worth tens of millions of pounds. It's entertaining, but probably highly inaccurate.

A little research shows the men, pictured above, work for Laffer Abogados. In fact it's easy to identify them from the company website as partners in the law firm. Laffer have offices in Bilbao, Madrid and Pamplona and work with associates in England and Germany on things like... sport law in Spain. Throughout their website there are references to their work in this field and their expertise on the subject. They've worked with German clubs before and sides from the Premier League, including Arsenal.

It's also backed up independently. Several sources in Spain, including Marca, state they were involved in the highly complicated Javi Martinez to Bayern Munich transfer and helped the German club overcome tax issues. That was a prolonged situation which in itself probably helps explain why one transfer was successful and one not. Even Manchester United can't fight time, off the pitch.

Bayern Munich were able to get help on the tax complexities of the situation and complete a deal over several weeks. Manchester United moved in with time running out and it looks like they didn't start rushing until it was too late, or had no intention of paying the asking price for the player at any stage. 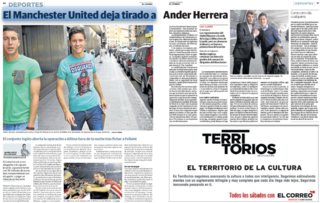 Local Bilbao newspaper El Correo, who have demonstrated the best connected reporting in Spain on this throughout, insist that representatives traveled from Laffer's Bilbao offices to Madrid and were representing both Ander Herrera and Manchester United in an attempt to get the deal done. They had not just turned up Only Fools And Horses style to try and become rich, they probably already are.

If you were a football club, or a footballer, wanting to employ experts on Spanish football law in Bilbao, then Laffer would be who you'd choose. To think that partners from the firm turned up in Madrid without having any encouragement to do so is frankly laughable.

We contacted Laffer on Tuesday morning to get their side, not expecting much given they're a legal firm and will be careful about how they approach such situations. Not for them to fire around accusations about the behaviour of others. Clearly frustrated by the reporting of the situation in Spain and England right now, the firm were unable to comment other than to say they were having a meeting and after that may be able to speak on the matter, perhaps not best to hold breath.

It's correct to say that Manchester United didn't send anyone to Spain, but that doesn't in turn make the partners from Laffer impostors. El Correo insist that Laffer are a prestigious firm highly respected in Bilbao and there's little reason to doubt that, the newspaper just think the whole move for Ander Herrera was a mess from start to finish.

They claim that Manchester United offered €30m on Thursday and wanted to pay this over four installments, a situation which was always going to be unacceptable to Athletic Bilbao. For them a Basque player has his own value, given their recruitment policy it's far harder for them as purchasers in the transfer market and this is reflected when they sell a player they'd rather stayed.

There's also the famous Basque stubbornness. When Fernando Llorente was intent on leaving the club because he wanted a new challenge, and more money, he quickly became person non grata with Los Leones. There was no turning back and little room for reconciliation, the situation helped neither the player or club but demonstrated that Athletic Bilbao have strength in such matters even if those principles may seem unreasonable at times. What Manchester United valued Herrera at, and it's clear it was less than his clause, doesn't really matter. Whether he's actually worth €36m or €10m less is irrelevant to the Basque club, that was the price and if Manchester United wanted the player then that's what they had to pay.

Understandably there's anger in Spain at the situation and Manchester United's reputation has been damaged. El Correo claim that some people connected to the deal think it was a case of either Marouane Fellaini or Ander Herrera when it came down to the wire, and that the big Belgian won out. They say the club's credibility in the transfer market has been damaged.

Reports that Manchester United weren't sure what they had to pay are incorrect. There are four copies of a player's contract, one of which is held at the Spanish league and they would have informed Manchester United what the amount was. Tax issues could have been overcome, with the help of Laffer, but the realisation that a training fee would have to be paid to previous clubs was another late hurdle and an added cost of around €1.8m.

With the hours running out, Manchester United walked away and concentrated on securing Fellaini with a late move for Real Madrid's Fabio Coentrao falling through despite the best efforts of Jorge Mendes.

There have been errors in the Herrera deal and the player feels a promise to him was broken, there is some anger from Athletic Bilbao fans towards the midfielder but it's nowhere near the Llorente level and the irritation will no doubt move toward Manchester United instead. Laffer were not impostors, they may have not been able to give Manchester United and Ander Herrera the answers they wanted but they have a history in this field, a successful one.

A naivety in thinking Athletic Bilbao would in the end reduce the price to please Manchester United and accept staggered payments could be to blame or it could simply be that the club were never going to pay what the Spanish club wanted whether the deal came to a head in June or three hours before the close of the transfer window.

Nobody wins. Least of all Laffer Abogados who are, almost certainly unfairly, being painted as scam artists throughout the European media.

For an alternative view on the failure of the transfer, and how it could be down to Athletic Bilbao and not Manchester United, read this

Gary Cahill is 25/1 first or last goalscorer with William Hill in England's clash with Moldova on Friday.Bet £25 Get a £25 Free Bet.