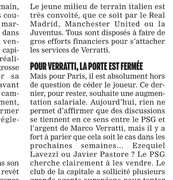 PSG are keen to complete the signing of Angel Di Maria from Real Madrid but can't do that without offloading one or more big name players, according to reports throughout France and Spain. Edinson Cavani is the name most frequently mentioned but it's going to be difficult to find a club willing to pay anything like what PSG gave to Napoli for him.

Another option is Marco Verratti. The 21 year old is one of the best young midfielders in European football and PSG would like to keep him with them but if they want Di Maria and can't sell Cavani or others then Verratti is an option.

Le10 Sport magazine say that the Italian international is wanted by Real Madrid, Juventus and Manchester United. It's claimed that all three are 'willing to make a big financial effort to secure the services of Verratti'.

Real Madrid's interest will have almost certainly disappeared after the signings of Toni Kroos and James Rodriguez and Juventus simply wouldn't be able to get to Verratti's asking price. Even if they sold a certain Chilean midfielder.

It's stated that PSG really don't want to sell Verratti but are desperate to complete the purchase of Di Maria from Real Madrid. As times goes on and if players such as Cavani, Ezequiel Lavezzi and Javier Pastore prove too hard to get good fees for then it may be worth Manchester United following up on their reported interest.